At least that's what it feels like I've been doing.

I finally finished the front panel of the Betsy Morgan casket.  I like it. A lot. 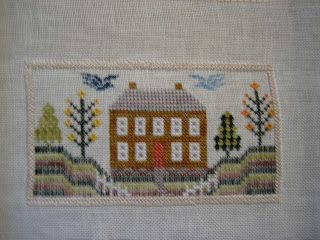 However, I was beginning to think that I was literally laying bricks myself. The house is filled in with Smyrna crosses, worked over two threads. And there were a lot of them. A lot.

I'd rather do Queen stitches than Smyrna crosses. Of course I got to do those, too, in the little trees. Those were fun.

We could opt to use two threads for the hillside, but I'm beginning to be concerned about the amount of thread I have left for the last four panels that I need to do. I opted to play it safe. Quite frankly, I would rather have too much thread in a kit (and I'm willing to pay for it, of course). I'd rather have it and not need it than need it and not have it.

But at least the house is built. On to the next panel!
Posted by Ann at 4:26 PM