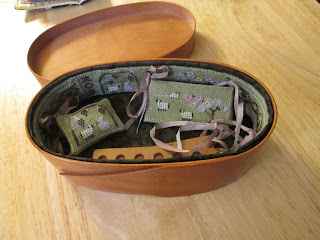 Should I admit that it almost took longer to locate the bag of fiberfill for the pin cushion than it took to put this set together?

Maybe I'm getting the hang of finishing. 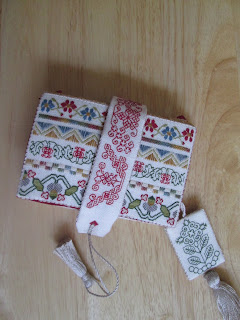 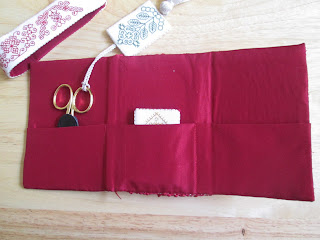 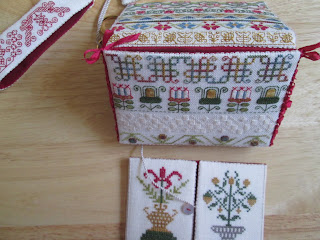 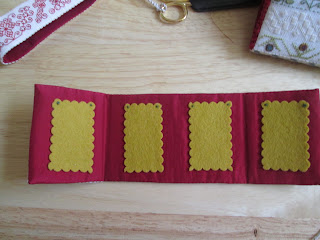 The mail carrier dropped off a distraction: 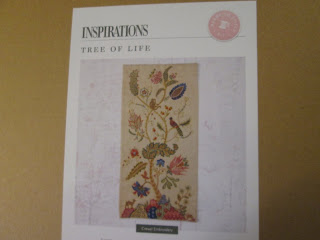 So this is on the outside of the box. It's one of Margaret Light's projects from her new book that Inspirations published at the end of last year.

So, I opened the box and dumped out the threads, and, oh, my, such lovely colors. 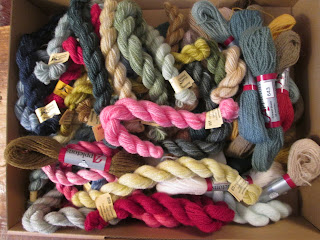 It's hard to tell, but there are some beautiful overdyed threads, as well as the more muted, solid colors.

But I am persevering with my assembly of Emie's Etui. This is what I plan to view for the rest of the day: 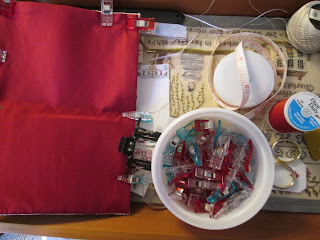 At the moment, I'm sewing a red silk lining on the back of part of the etui. It's a good thing that it's red; I have left some DNA on it. I should not be allowed to use a sharp needle without supervision. Actually, I'm not sure supervision would make any difference.

If I can get all the linings done before I go to bed tonight, I will just have the band that holds the etui closed to assemble tomorrow.

This may, however, mean that I go to bed around 5 a.m. I need to stop drooling over the Tree of Life threads and get back to work.

I think I mentioned I had five projects hanging out in the basket by my chair that need finishing.

Normally, I would be in Williamsburg this week for the annual get-together of like-minded embroiderers and fans of dining out. In fact, last year's event was the last trip I made in 2020, and the last workshop I attended face-to-face, before the New-and-Unpleasant-Normal descended. Obviously, we are not meeting this week in person, but we are having a virtual event. So I am taking a week of vacation so I can Zoom with my friends.

And what better time than this to tackle those five projects, especially as I discovered that there was another member of our merry band who also has a stack of things to put together. I am not alone in enjoying the embroidery, but the sewing together part, not so much.

So this is what has been accomplished thus far: 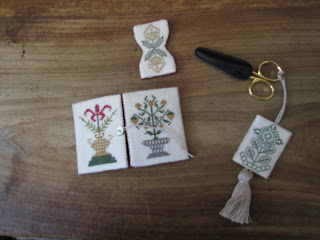 The rest of the etui, the actual carrying case, is awaiting my needle. I have all the bits and pieces cut out--Betsy Morgan, who designed this set, uses an assembly line approach to putting her sets of smalls together.  However, I need to talk to Baby Girl again, since she figured out exactly how to put the carrying case together. Without being able to take the class, I'm not sure I could have done it by myself. I may have mentioned that Baby Girl can visualize things in three dimensions, so she is the perfect person to stitch something like this with. 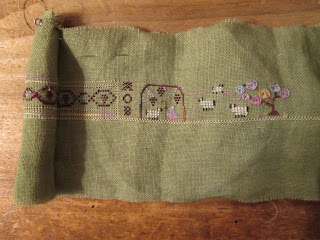 Neck and neck at the finish line

Earlier this week, I finished the stitching on Emie's Etui: 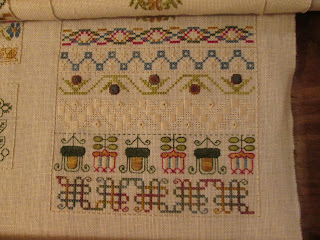 One of the habits I wanted to establish this year was to do the finish-finishing on any smalls I stitched as soon as the embroidery was done.  So why haven't I started putting this together?

Baby Girl and I had decided to work on this together, since we couldn't take the class together. That included the assembly. Then she was seduced by the lure of a bag of luscious plum-colored yarn and decided she would alternate projects, which means she's about a week behind me in stitching.

So I pulled another UFO out of the pile, the Strawberry Purse and Accessories from a class Catherine Theron offered through Shining Needle. I hit the wall on tent over one and put is aside a couple of months ago.

Now the embroidery is finished on it. 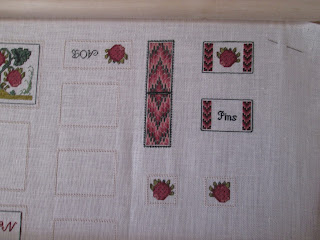 Now I have to decide what to do--pull out another UFO and finish the stitching, or start putting one of these together, or spend the afternoon in another pursuit entirely . . . I think I'll start a pot of vegetable beef soup while I think about it.

Almost on the home stretch

I stitched Sunday afternoon. I ripped out what I stitched on Sunday on Monday evening. I restitched what I had ripped out on Tuesday and Wednesday evenings. And I finally got the second panel for the body of Emie's Etui stitched. 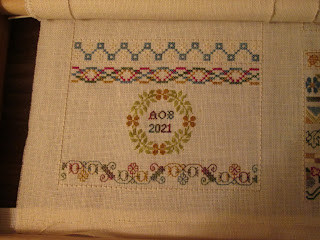 I was under the weather for a couple of days, so no needle was threaded. However, I did dream, because this arrived in the mail this week: 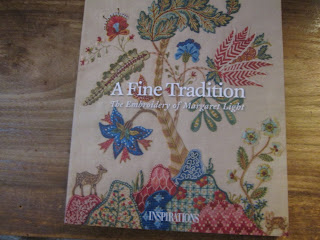 There are a dozen projects in this book. I want to stitch nine of them.
Not sure I'm going to live to be 400, but I may need to plan for that.